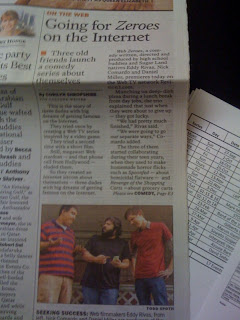 Going for Zeroes on the Internet

This is the story of three dudes with big dreams of getting famous on the Internet.

They tried once by creating a Web TV series inspired by a video game.

They tried a second time with a short film.

Still, megawatt Web stardom -- and that phone call from Hollywood - eluded them.

So they created an Internet sitcom about themselves -- three dudes with big dreams of getting famous on the Internet.

Munching on deep-dish pizza during lunch break from day jobs, the trio explained that just when they were about to give up -- they got lucky.

"We had pretty much finished," Rivas said.

"We were going to go our separate ways," Comardo added.

The three of them started collaborating during their teen years, when they used to make homemade horror flicks such as Spoonfed -- about homicidal flatware -- and Revenge of the Shopping Carts --about grocery carts with a murderous bent.

In 2007, they formed their Web production company, Smooth Few Films. In between work commitments, they produced short films and the Web series The Leet World, based on the video game, Counter-Strike. While using video game technology to create movies and TV shows was cool among fellow Web and gaming geeks, it was a bit too nerdy and niche for the masses.

Plus, there was no money or glory.

Last summer, Miller came up with the idea of making a show that told their story. Comardo and Rivas were an easy sell, and in short order, the trio filmed four episodes of Web Zeroes.

"We wanted something live action with us in it," Comardo said, "where we weren't just sitting around computers all day."

"We wanted to make something that was ours," Miller added. "It was very meta. It was a show about us trying to do what we're doing."

"Caricatures of ourselves," Comardo said.

"Hopefully, people will think we're cool," said Miller with a deadpan face as the others laughed.

But by December, the show was hardly the breakthrough hit they'd anticipated.
"Not a lot of people seemed to watch it," Rivas said.

Then they got an e-mail from a fan who happened to be a production intern at Revision3, a Web broadcasting site.

In August, they signed a deal to produce 12 episodes of Web Zeroes, the Web broadcaster's first scripted sitcom.

"They're a credible and perfect fit for our audience," said Ryan Vance, Revision3's vice president of programming and production. "While the characters and situations are fictional and amplified for laughs, their writing comes from their real experiences and expertise online."

Rivas writes the scripts, Miller directs and Comardo edits. Even Rivas' wife helps out, making cameo appearances and sometimes holding the microphone.
Revision3 will air the shows, and the trio will pocket a portion of the advertising proceeds.

"The cool thing about the Internet is that it gives you the chance to show a bunch of people something you've done," said Rivas.

"To get your movie in a theater, forget about it," added Miller. "If you don't have millions of dollars and a suit behind you, no one cares."

Rivas, Comardo and Miller haven't quit their day jobs yet.

That will take, said Comardo, "a unique set of circumstances."

Everyone, after all, is trying to figure out how to make big money on the Web.

"It involves a lot of zeroes at the end of a check," said Miller, as he finished up his pizza.

Then all three burst out laughing.
Posted by Drew Kerr