In the old days, college students might turn to classmates for help during all-night cram sessions before final exams. Now their study buddies are just as likely to be commercial Web sites with step-by-step solutions to textbook problems, copies of previous exams, reams of lecture notes, summaries of literary classics, and real-time help with physics, math and computer science problems. 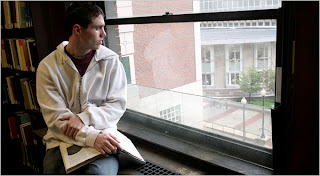 “It’s a backup,” said Chris O’Connor, a pre-med sophomore at Columbia University who relies on a popular site, Cramster, to unravel the mysteries of complex math and science problems.

“Many professors who return homework won’t tell you how you got it wrong — just that it’s wrong. This way you can complete the feedback process, which is essential to learning.”

But as companies with playful names like Cramster, Course Hero, Koofers and SparkNotes are transforming the way undergraduates like Mr. O’Connor study, some professors and ethicists are questioning whether such Web sites encourage cheating and undermine the mental sweat equity of day-to-day learning by seducing students with ready-made solutions and essays.

On Course Hero, for example, students can type in a college name and course number to unearth the previous semester’s particle physics final exam. They can find examples of research papers on, say, the causes of World War I. For homework, Cramster supplies step-by-step solutions to problems in more than 200 college-level math and science textbooks.

“There are professors who don’t change their questions from semester to semester, and one of the things that this raises is how problematic that is,” said Teddi Fishman, director of the Center for Academic Integrity, which is part of the Rutland Institute for Ethics at Clemson University. “Part of what’s valuable about homework is that it gives you a safe space to practice and struggle.”

But defenders of the Web sites — including some professors — say that teachers should not be recycling exams and that students who simply copy homework solutions hurt themselves at exam time. Many of the documents posted on the Web sites, like term papers and prior exams, have long been available to members of fraternities and sororities, which archive them (this has also been a source of complaints in the past).

David A. Sachs, an associate dean in the Seidenberg School of Computer Science and Information Systems at Pace University who is joining an advisory panel for Cramster, said in an interview that colleges need to rethink practices in light of the Internet age.

“As faculty, we need to be better educated about what the possibilities are, and the truth is you can’t put the genie back in the bottle,” Dr. Sachs said. “If Cramster and all these companies disappeared tomorrow, you could still do a Google search and find what you’re looking for in five minutes.”

David J. Kim, president and chief executive officer of Course Hero, which started early last year, said the premise of the company was to “bring the concept of study groups” online. “A student may know one or two people in their class,” he said, “but we wanted to provide an online community where you could connect with students from different colleges studying the same subject.”

Course Hero offers three million student-submitted items from 400,000 courses at more than 3,500 institutions, including lecture notes, study guides, presentations, lab results, research papers, essays and homework assignments. Users who submit such items can navigate the site free of charge; others pay a monthly fee. Mr. Kim declined to say how many users had registered beyond “hundreds of thousands” and said they included more than 1,000 professors using the site to refresh their teaching materials.

Mr. Kim also said that Course Hero, which warns users against cheating and plagiarism, had honored a handful of requests from professors to remove certain notes. “They felt that some material was released only to their students and they didn’t want it disseminated beyond that,” he said.

Students can also post queries to Cramster’s 3,000 “experts,” who are rated for quality (just like sellers on eBay) and earn “karma” points for rewards like laptops, iPods and gift cards. An expert, according to Aaron Hawkey, Cramster’s chief executive officer, could be a brilliant high school senior bound for M.I.T., a professor or a retired engineer. In addition, the company has in-house staff members who moderate the question-and-answer board.

“There’s no doubt our site can be abused,” Mr. Hawkey acknowledged. “Let’s say I have a take-home test. We had one incident where someone posted a question on our site that was the same one on an exam.”

He said that Cramster had banned individual students from the site after receiving complaints from professors. “We know that some professors don’t think their students should see the step-by-step solutions,” he said. “But homework is worth such a small percentage of your grade. And Cramster can’t take the exam for you.”

Some professors counter that sites like Cramster have helped devalue homework. “For large undergraduate entry-level classes, it’s something you need to take into account and have a strategy for,” said Kyle Cranmer, an assistant professor of physics at New York University. “One way of coping is not to weigh the homework as much, or you try and adjust the problems.”

William H. Kinney, an assistant professor of physics at the State University at Buffalo, Cramster’s biggest source of users in New York, said that for students who have genuinely wrestled with homework problems, the ability to identify where they got stuck — by taking a peek at Cramster’s step-by-step solutions, for example — can be a “great thing.” But he finds some of the items available on the site disturbing.

“Students have projects where they’re supposed to write a piece of code,” he said. “One thing the Cramster computer science message board has in large quantities is functional computer codes that you can cut and paste. In the computer science department here, that would be serious academic misconduct.”

Ultimately, though, Professor Kinney said the system is “self-policing.” “If the students just copy down answers to the homework, they will not do well on the exam,” he said. “The students who behave ethically will do well.”

Eric Jongsma, a junior majoring in mechanical engineering at SUNY Buffalo, said he had found Cramster invaluable for extra practice and problem sets, but learned the hard way not to abuse it, after getting lazy last fall and turning to the site to “just plug in the numbers” for physics homework.

“When it came to the test, I tried to learn multiple chapters at the last minute,” he said. “I failed the test.”
Posted by Drew Kerr