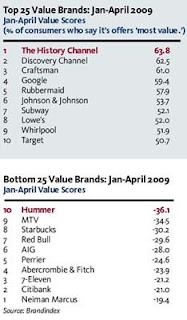 Value. It’s a word you hear tossed around quite a bit in this economy, but not one that applies to every brand, according to a recent report.

A survey by Brandindex, a daily measure of brand perception by the London-based firm YouGov taken from January to April, found that some brands, like Starbucks and General Motors’ Hummer are not convincing consumers that they offer value.

Hummer came in dead last in a survey which is based on about 300,000 online interviews with consumers who are 18 and older. YouGov polls 5,000 people a day and asks them to rate about 200 brands.

Hummer’s main problem is that the public’s mood has changed drastically since the brand was introduced in the 1990s, said Ted Marzilli, global managing director for Brandindex. “Hummer is one of those brands that suffers from a reverse halo effect,” he said, adding that the public’s concerns regarding gas and oil prices as well as climate change have worked against the brand. “Hummer is a brand that depicts excess rightly or wrongly, so it gets picked on.”

Starbucks suffers from similar issues. “Starbucks has almost become a punchline for a joke regarding a $4 cup of coffee,” Marzilli said. “A lot of the other brands, like McDonald’s and Dunkin’ Donuts for example, have really gone hard at Starbucks. [They are] trying to make people take a step back by saying, ‘People, is $4 for a cup of coffee what you really want to be spending your money on?’”

The top value brand, meanwhile, was The History Channel, which Marzilli said reflected the fact that the brand scored high in many categories. “Value” in this case may have referred to the educational component consumers felt they were getting from the channel. In comparison, MTV was penultimate for “least value” in the report.

The top nonmedia brand for value in the survey was Craftsman, which along with other brands in the top 25 like Rubbermaid, Whirlpool and Kenmore, showed consumers associate longevity with value in some cases. “They are dependable brands that have been around a long time,” Marzilli said. “They have a very long history of being good brands—not particularly flashy and not particularly expensive—and people see them as offering quite a bit of value.”

One somewhat surprising omission in the top 25 is Wal-Mart, which seems to have been bested by Target on the value front. “Target being on the list is interesting because Wal-Mart’s not on the list or not in the top 25. That’s an area where consumers are distinguishing between low price and value,” Marzilli said. “I don’t think most people would say Target has lower prices than Wal-Mart, but put in the context of ‘Do you get a lot for what you paid?’ people rated Target higher than Wal-Mart.”

Among the big movers on the list, Ford’s jump can be attributed to the fact that the brand refused federal bailout funds. “They’ve kind of made a differentiator of themselves by saying, ‘We don’t need money. We’re going to manage our business better,’ and I think that’s getting a lot of positive effect among consumers.” 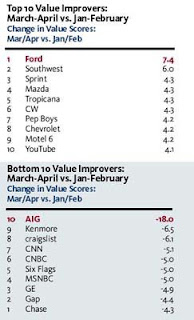 Chevrolet, however, was also among the big improvers on the list.

The brands whose image as a value leader have taken the most hits this month includes AIG, which is likely another “reverse halo effect” of an overall negative perception.

The same could be said for craigslist, which got its share of negative press for the “craigslist killer” and charges of prostitution being offered over the site. Similar collateral damage was seen with the cable networks CNN, CNBC and MSNBC. Said Marzilli: “There’s been so much news related to the financial crisis and the bailouts of the automakers that maybe people are just tired of hearing the bad news.”
Posted by Drew Kerr