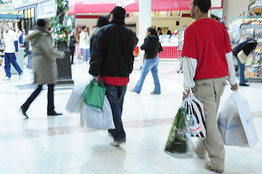 In recent months, shoppers have voted with their wallets, spending more money at Wal-Mart Stores Inc. while cherry-picking the sales at other stores.

New data from BrandIndex, which polls 5,000 consumers each day, asking “Do you receive good value for what you pay,” confirms the trend. Discounters Target and Wal-Mart have seen their scores rise over the past six months, while Abercrombie & Fitch, which bucked the discounting trend, and luxury retailers Neiman Marcus and Saks Fifth Avenue saw their saw their scores stay in the negative range.

A negative ranking doesn’t mean people dislike a retailer, notes Ted Marzilli, senior vice president at BrandIndex. “But in a time like this,” he says, certain retailers, including luxury retailers, “get written off. They’re not on people’s radar screens anymore because they are not in the consideration set.”

Readers, has your perception of the value provided by stores changed in the last few months?
Posted by Drew Kerr