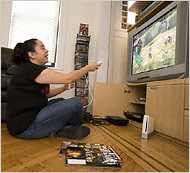 The main online site of Future US, Gamesradar.com, had 4.9 million unique visitors.

Jonathan Simpson-Bint, the publisher of Future US, said that his company also focuses on special issues for releases of new game systems like Wii, which come with high-quality visuals and a high newsstand price.

Given the competition from the Internet, “we’ve had to be more ingenious about the way we’ve approached it,” Mr. Simpson-Bint said.

Mr. Simpson-Bint of Future US said that the Internet was not the only drag on the revenues of game magazines. Another factor, he said, was the mercurial nature of the games market itself, where a slowdown automatically means a drop in advertising.