Land AARP The Magazine in the NY Times' ad column

WHEN Nancy Perry Graham, the editor of AARP The Magazine, attended a Bruce Springsteen

concert at Giants Stadium in New Jersey last October, she and several editors on her staff wore black T-shirts with the words “AARP The Magazine — Rocking Generations of Readers” printed on the back. 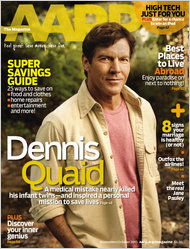 Dennis Quaid, 56, was on the cover of AARP The Magazine to publicize the issue of medical errors. The magazine's cover subjects have become somewhat younger and its articles have a less geriatric tone.

On the front was the current issue of the magazine, featuring the rocker on stage with the headline, “The Boss Turns 60.” But as Ms. Graham, who is 55, said in a column in a subsequent issue, not everyone encountered at the concert shared her staff’s enthusiasm, most notably a woman in her 60s who said, “But why would you want people to know you’re old?”

There was a time when editors at the magazine — published bimonthly by the organization that advocates for Americans over 50 — fully expected AARP-eligible celebrities to reach for a 10-foot pole when invited to appear on the cover, but Ms. Graham said in a recent interview that the magazine has in the last few years “reached a tipping point where we’ve had A-list celebrities coming to us to be on the magazine.”

In fact, publicists for the current cover model, the actor Dennis Quaid, 56, approached the magazine, said Ms. Graham, saying that Mr. Quaid was primarily interested in speaking on behalf of victims of medical errors after his own 12-day-old twins nearly died when both were inadvertently given overdoses.

It turns out that the AARP magazine, which assures readers that they are in their glory years, is itself remarkably spry, never mind the economic downturn. The magazine sold $23.9 million in advertising in the second quarter of 2010, compared with $20.9 million during the same period in 2009, an increase of 14.5 percent, according to the Magazine Publishers of America.

During that same period, among roughly 235 major magazines, revenues grew 6.2 percent. As for the number of advertising pages sold, the AARP magazine was up 10.4 percent in the second quarter over last year, compared with an average page increase of just 1.1 percent for magazines overall.

Mailed free to AARP members, it has the largest circulation of any magazine, distributing 24.4 million copies each issue in 2009, more than three times that of Reader’s Digest, which has the third largest distribution, with 7.6 million.

(An issue-oriented AARP publication, AARP Bulletin, had circulation of 24.2 million.)

AARP now includes within its eligibility range the majority of baby boomers — those born from 1946 to 1964 — making them, in a bit of symmetry, 46 to 64 years old. And the magazine, which in an earlier incarnation was called Modern Maturity and struck a more geriatric tone, now tends to feature on its cover celebrities on the younger side, including the actress Valerie Bertinelli (50) and Dr. Mehmet Oz (50).

Formerly known as the American Association of Retired Persons, the organization started going solely by its acronym a decade ago, and to say it represents retired people today is largely a misnomer: about half of its 40 million members are still working. (Membership exceeds the magazine’s circulation because only one issue is sent to a household.)

The current issue of the magazine (September/October) unveils a redesign that is decidedly contemporary, with more white space, short articles that tend not to jump to another page, and numerous referrals to the Web site (aarp.org/magazine), which also has been revamped.

Channels on the Web site recently expanded to 13 from seven, including one channel for technology, debunking the perception that older Americans are not computer literate. In fact, 46 percent of boomers were on a social media network in 2009, up from 30 percent in 2007, according to eMarketer, a research firm.

In a recent study, Nielsen determined that boomers account for 38.5 percent of purchases of consumer goods, yet only 5 percent of advertising expenditures are currently aimed at those ages 35 to 64.

“Today’s middle-aged and older consumers are different than their predecessors,” said a post about the study on Nielsen’s Web site. “The conventional wisdom that they spend little, resist technology and are slow to adopt new products needs to be re-assessed. Boomers are an affluent group who adopt technology with enthusiasm.”

While AARP previously catered to different ages of its membership with different publications (in 2002 it introduced a publication called My Generation aimed at those 55 and under while sending Modern Maturity to those over 55), today it sends AARP The Magazine to all members, but sends slightly different versions to those 50 to 59, 60 to 69, and over 70.

In the current issue, the 70-plus version substitutes an article about hearing aids for one about hotel-branded merchandise in the other versions.

It also substitutes an advice column about changing careers at 51 with one about writing a novel, and an article about maintaining a strong marriage is accompanied by a modified illustration by Kagan McLeod of a couple sitting against a tree that bears their carved initials. (The illustration for older readers features a man who is bald rather than graying, a woman wearing a long skirt rather than jeans and, resting between them, a cane.)

“AARP has garnered this enormous audience and gets the buying power of this demographic,” said Lori Hiltz, executive vice president of the Chicago office of MPG, a division of Havas. She previously served as a senior vice president at the PHD unit of Omnicom in Detroit, where she worked on a campaign for the Jeep division of Chrysler, which is still running in the magazine.

Unlike the previous generation, “the 50-plus consumers coming into the segment now have adopted new technology, are more likely to have a college education, and have a greater depth of discretionary income,” Ms. Hiltz said.