IMG Worldwide and TV's "Dog Whisperer," Cesar Millan, are looking to take a bite out of the growing pet-care market.

In the face of a harsh advertising climate, the New York sports management and entertainment firm is launching a magazine dedicated to dog owners and their pets. The new publication, Cesar's Way, is a joint venture between IMG and Mr. Millan, a dog trainer used by celebrities like Oprah Winfrey. The partners declined to discuss the project's finances. 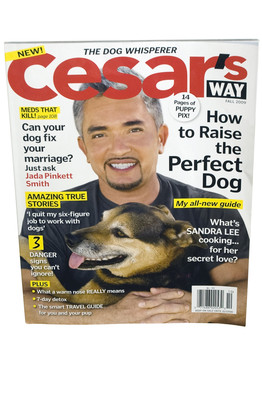 Inaugural issue of Cesar's Way. A second issue is planned this year and six in 2010.

Cesar's Way, which hits newsstands next week, is filled with slick photos of celebrities such as Mariah Carey, Paris Hilton and Jennifer Aniston with pets in tow. Articles include "Can Your Dog Fix Your Marriage? Just Ask Jada Pinkett Smith" and "7-Day Doggie Detox." IMG says it plans to publish two issues this year and six in 2010.

The magazine is the latest example of TV personalities trying to parlay their popularity into newsstand sales. Mr. Millan, who will be editorial director of the magazine, has starred in National Geographic's popular canine reality series -- think "Super Nanny" for dogs -- since 2004.

Some of the magazine industry's biggest hits have been celebrity-edited, says Lee Rosenbaum, vice president of IMG's publishing arm. "Just look at Oprah and Rachael Ray," he says.

But it's a you-know-what world out there. The new magazine joins about 60 other dog-related titles in the U.S., including Dog Fancy, Doggie Aficionado and Urban Dog, according to the National Directory of Magazines.

"Like all publications, it's been a little slow for the past two years," says Norman Ridker, founder and president of BowTie, a privately held publisher of dozens of pet magazines, including Dog Fancy and Dog World.

In addition to its many rivals, Cesar's Way faces the worst ad climate in decades -- one that has forced the closure of such magazines as CosmoGirl, House & Garden and Domino. In the first half of 2009, magazine ad revenue plunged 21% from a year earlier to $9 billion, according to the Publishers Information Bureau.

Celebrity-edited magazines, too, have been stung by the downturn. Ad pages in Every Day With Rachael Ray fell 14% for the first six months of the year, while ad pages in O, The Oprah Magazine, slid 29%.

IMG knows firsthand how tough the recession has been. Earlier this year it closed down Tennis Week, which had been around for decades.

Still, IMG and Mr. Millan think they can profit from the 75 million dog owners in the U.S. and the pet industry, which has proved to be somewhat resistant to the recession. Sales of pet food and supplies are expected to increase 2.9% to $27.5 billion in 2009, according to research group Mintel International.

"People have continued to spend on their pets," Mr. Millan says. "You always want to make sure your family is taken care of, and Americans believe the dog is part of the family."

IMG isn't the only company to see dollar signs in the pet market. Martha Stewart Living Omnimedia added a pet destination to its Web site this year. Honda Motor introduced an Element with features such as a cushioned pet bed in the cargo area and a pet-restraint system.

Media buyers says it's a tough time to start a new title, but some of them say having a narrow audience can be appealing to advertisers.

"Niche magazines today are more important, because marketers are trying to be more efficient with their ad dollars, and this would be a way for pet food and pet services companies to reach their target audience," says Robin Steinberg, director of print investment at Mediavest, a media-buying firm owned by Publicis Groupe.

While ad spending on pet food has fallen, it has fared better than other sectors. Ad outlays by pet-food companies slid 5% to $299.2 million in 2008, less than the declines of 15% and 5.7% seen among auto makers and telecom companies, respectively, according to TNS Media Intelligence. For the first three months of this year, spending on pet food ads rose 24%.

The magazine is part of a marketing effort to turn Mr. Millan into a household name. IMG has represented him since 2007, during which time he has written several books, created a popular Web site and produced several dog-training videos.

Almost half of America's consumers already know who he is, and consumers' awareness of Mr. Millan has grown 12% since May 2008, according to Davie-Brown, an Omnicom Group company that tracks the appeal of celebrities.

One area that seems to defy the down market is the money people spend on their pets. And marketers have taken notice, as a growing genre of slick, pet-lifestyle magazines suggests.

The latest to be unleashed is Cesar’s Way, a spinoff of the popular National Geographic Channel’s The Dog Whisperer starring dog behavior expert Cesar Millan. Launching Sept. 15, Cesar’s Way is the first regularly published consumer magazine from IMG, the sports, media and entertainment marketing company behind such events as Fashion Week and its related publication The Daily (and Millan’s rep).

It’s also the latest in Millan’s growing media empire, wh ich includes the show going into its sixth season in October, a line of products at Petco, books and a one-hour strip on Twentieth Television starting in fall 2010.

Cesar’s Way will publish twice in 2009 with a guaranteed circulation of 150,000 and six times in 2010, when the rate base will rise to 250,000. Stories will feature celebrities and their dogs, human-interest tales and dog-training tips.

But don’t call it a dog magazine, said Lee Rosenbaum, vp, publishing at IMG and ex-publisher of the erstwhile music magazine Blender. “We show [people’s] lifestyles and how dogs fit within their lifestyle,” he said, adding, “It’s a bit of a mixed breed.”

Indeed, this new breed of pet magazines considers itself a different animal from the older, less-glitzy pet titles like Dog Fancy and American Kennel Club publications. (That top fashion photog Gilles Bensimon shot the cover of the first issue of Cesar’s Way is bu t one indication.)

“I think we try to transcend that Best in Show stereotype,” Rosenbaum quipped. Other such “dog culture” magazines include The Bark, a six-times-a-year magazine and Modern Dog, a quarterly.

“Dog Fancy, the old, traditional take on dogs, was just basically about service, how to show [and] breed dogs,” said Cameron Woo, publisher of 120,000-circ The Bark, adding that his title “launched a whole wave of pet coverage.”

Such titles are making inroads with not just pet food marketers but blue-chip auto, travel and packaged goods advertisers. The Bark is on track to car ry about 200 ad pages this year including Bissell, Jeep and Subaru with its irreverent coverage (recent topics included the South Korean practice of dining on dog and canine representation in Renaissance painting).

“It has broadened from the traditional advertisers—dog food, accessories, toys and leashes—[from] companies that…carry those things as part of their business to car companies who want to reach out to this demographic,” Woo said.

Similarly, Cesar’s Way is carrying Sketchers, JetBlue and Best Western in its launch issue in addition to Frontline and Del Monte pet food. “The dog is really part of the family, and a caregiver is a caregiver,” explained Rosenbaum. “So if you can engage that caregiver, it’s easy to engage them in talking about the other members of the family.”

Martha Stewart Living Omnimedia this year launched a new pet channel on its Web site and added related content to its TV and radio show and in its magazines Martha Stewart Living, Everyday Food and Body + Soul. Nestlé Purina PetCare was the sponsor.

Also, Hearst’s Country Living has expanded its pet coverage this year under editor Sarah Gray Miller and has seen an uptick in pet advertising. People.com started a pets channel in December to tap into reader interest in celebrities’ pets.

Yet Baltzer said national publications’ efforts to add pet content don’t a lways succeed. “Some just want to do advertorial sections,” she said. “It’s not as committed. The advantage of the pet enthusiast [title] is you know someone is reading the publication because they truly are a pet enthusiast.”

Cesar Millan, who has built a media and merchandise empire by getting neurotic dogs to behave, is adding another medium to his media portfolio: print. In partnership with IMG, a sports and entertainment marketing company, Millan is launching Cesar's Way Sept. 15, which will have a guaranteed circulation of 150,000 with two publication dates in 2009.

If all goes according to plan, Cesar's Way will increase its rate base to 250,000 in 2010, when it will publish bimonthly. The launch issue includes natural endemic advertisers like Del Monte's pet food brands, but also human-focused brands like Skechers, JetBlue, and Best Western.

The magazine will cover various subjects pertaining to human-canine relations, including stories about celebrities and their dogs, regular people and their dogs, and dog-training tips. Cesar's Way will also feature lifestyle content focused on how people adapt (or fail to adapt) to dog ownership. The magazine will probably feature the information that makes Millan's show on the National Geographic Channel, "The Dog Whisperer," so fascinating: His almost supernatural understanding and faculty for communicating with dogs.

While it's launching in a difficult environment for consumer magazines, Cesar's Way is banking on Americans' enthusiasm about pet ownership. Indeed, established titles about pets have held up better than other consumer magazines in recent years. From June 2004-June 2009, according to the Audit Bureau of Circulations, Dog Fancy and Cat Fancy have both seen their total circulation hold steady at about 240,000.