Do Study Sites Make the Grade?

At 10 p.m. on a recent night, high-school senior Scott Landers was having trouble figuring out differential calculus in order to compare rates of change.

With his professor unreachable and the exam set for the next day, he sent a shot in the dark to Cramster, an "online study community" recommended by classmates.

Within two hours, Mr. Landers was surprised to find his answer pop up in his email, followed by a few more responses the next morning, all pointing in the same direction. "I thought it was cool that there were people out there actually willing to help me," he says. 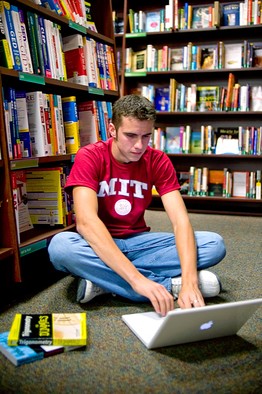 Web sites such as Cramster aim to revolutionize the way students study, much the way that networking sites like Facebook have changed the way people socialize.

Course Hero, launched last year primarily for college students, already holds a library of more than two million course documents, including homework, class notes and graded essays, uploaded by students enrolled at 3,000 different colleges. Koofers (a nickname at Virginia Tech for old tests passed around at fraternities) allows students from about 25 state universities to submit posts about the difficulty of courses taught by different instructors at their schools. It also offers average semester grades from instructors. Enotes, geared mainly to high-school students, allows peers to form discussion groups and pose questions to experts -- usually teachers -- who are paid by the Web site.

Not surprisingly, at a time when schools are cutting back on classes and faculty, and students are cutting down on expensive tutors, visits to the sites are skyrocketing. Cramster, which has more than 500,000 registered users, says its monthly subscriptions, at $10, are about double what they were a year ago, according to co-founder Aaron Hawkey. Registered users on Course Hero have doubled each month so far this year, says President David Kim, though he declines to reveal the number.

Many teachers, however, aren't enthusiastic about the sites, claiming they promote dishonesty among students. In addition to answering homework questions, some sites offer test answers and professors' old tests. Cramster offers a bank of answers to various problems, along with the steps taken to get to the solution, for 225 different textbooks.

While it's one thing for students to share class notes, it's another for students to easily access old exams created by a professor, says Teddi Fishman, director of the Center for Academic Integrity at Clemson University. "It's not unreasonable for a professor to recycle an old test," she says, which would give study-site users an unfair advantage. The old exam also belongs to the professor, she says, while the Web site ultimately profits from using it. "That's unethical," she says.

"Some teachers think we're the worst thing to ever happen," says Koofers Chief Strategy Officer Michael Rihani. To address such concerns, many sites make an effort to discuss cheating up front. Mr. Rihani says he approaches honor committees for each university before posting course materials and past tests on the site, "to make sure we're not promoting something that's going to get students in trouble."

Enotes allows students to ask one free question per day, to prevent cheating. Cramster states flatly on its site that it will ban users who cheat, and offers a place for teachers to contact them if they discover cheating. For high-school students, Cramster offers only odd-numbered textbook solutions, which thwarts students from getting perfect scores on homework assignments.

Michael Grams, a physics professor at South Dakota State University, emailed Cramster to address conflicts with a student copying homework from the site. He reports that a site official stepped in to confirm the student's use of the site -- and ultimately banned her. "I'll give them credit for doing that," Mr. Grams says, though he still considers the site a "huge problem."

The study sites argue that they are mimicking the contents of countless study halls and cram sessions across the country: Notes, syllabi, homework and other documents get passed around. "The common sharing of notes, discussion that's articulated in a way they understand, are things that can be done online today," says Course Hero's Mr. Kim.

With the Internet, the sites say, it's inevitable that all this information will be available to students anyway. It's up to the schools, they say, to come to terms with modern times. "We're just putting things out in the open," says Koofers' Mr. Rihani, who says his site is making old tests previously accessible only to fraternity members, available to more students.

The study sites are likely to propel schools to rethink the way they teach. "What these sites are doing, is simply accumulating information that students would like to know, and putting it out there," says Virginia Tech marketing professor Jim Littlefield.

In fact, Professor Grams, the physics professor from South Dakota State University, said his students' use of Cramster has forced him to lessen the weight of graded homework to 10% of the final grade from 30% in the past. "I didn't like doing that," he says, "but I was pretty much forced" because of the study sites. Previously, he weighed homework equal to exams, in order to give students that worked hard a leg up.

Most sites charge a subscription fee while leaving some portion of their offerings free to the public. Course Hero charges $20 a month for students to access its offerings, although they can forgo the monthly charge by uploading at least 30 documents useful to peers, such as class notes or a graded test. Most of Cramster's offerings are free, but the site charges about $10 a month, or $50 a year, for "premium" membership, entitling students to more access and quicker response time on message boards.

In some cases, even professors have used the sites. David Choi, who teaches entrepreneurship classes at Loyola Marymount University's College of Business in Los Angeles, last year taught a course on product development to students enrolled at two different colleges. He uploaded class materials to Course Hero so that students from both schools could easily access the same files. "Information technology dramatically affects how we do business now," including teaching, he says.

The traditional model of university teaching is "that we are the givers of information," says Ms. Fishman. "We need to move to a model where the different sorts of information available are addressed and students need to learn to be critical consumers of information."

Matt Hastings, a senior at Virginia Tech majoring in finance, says he logs on to Koofers before choosing classes so he can research average grades by different professors teaching the same class. Last spring, Mr. Hastings signed up for a course on investments that fit well with his schedule. But after attending the first class, Mr. Hastings says he felt that the professor's teaching style "wouldn't keep my attention."

After class, he logged onto Koofers and looked at student reviews of other professors who taught the same course. Ultimately, he reworked his schedule to choose the class taught by a different professor. Mr. Hastings earned an A in the class.