Sometimes success means seeing in advance, with absolute clarity, where you should go. And sometimes it’s more like, “Whoa, dude, check it out.”

The instructional DVD-and-booklet packages published by Guitar World magazine fall into the latter group. The publisher, Anthony J. Danzi, describes them as a low-expectations play — put the material on magazine racks along with the 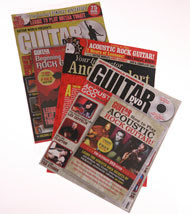 magazine, and see what happens.

What happened was that the DVD packages sold better at the newsstand than issues of the magazine itself, turning into an important income source for Guitar World and its owner, Future PLC of Britain. “It’s still kind of astounding to us,” he said.

A few weeks ago, Guitar World started selling the packages through its Web site, making available the old ones that have disappeared from newsstands.

Since the first one appeared in late 2005, Guitar World has a new DVD and booklet about once every three months, each with a specific theme — how to play acoustic rock, how to play Christmas songs, how to play Jimi Hendrix songs, how to play shred (speed metal, if you must ask). Despite a $9.99 price, they have sold 80,000 to 90,000 for each edition, Mr. Danzi said, while the monthly magazine, which goes for $7.99, averages newsstand sales around 80,000.

He credits Brad Tolinski, the editor in chief, with the idea. Guitar World already had a distribution network, video recording studios and relationships with professional guitarists, and each issue of the magazine contains a video CD focusing on a particular artist.

What makes the idea’s success all the more surprising is that on a newsstand, it looks like just a magazine. The DVD is not noticeable at first glance, and the letters “DVD” appear in fairly small type.

“The limitations of the newsstand kind of dictate to us what physical form it has to take, and we thought the packaging might hold us back,” Mr. Danzi said. “You can go out in the marketplace and there’s a gazillion guitar instructional products, in music stores and book stores. You don’t really think about the newsstand as a place people would go for this.”